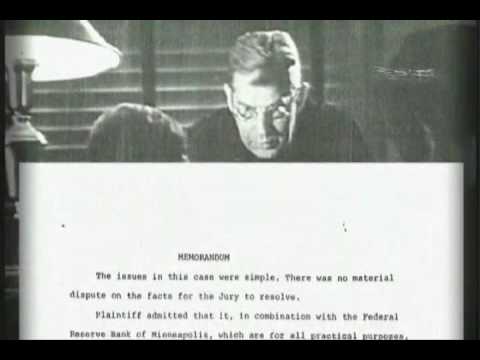 The above entitled action came on before the Court and a Jury of 12 on December 7, 1968 at 10:00 am.   Plaintiff appeared by its President Lawrence V. Morgan and was represented by its Counsel, R. Mellby. Defendant appeared on his own behalf.

Plaintiff brought this as a Common Law action for the recovery of the possession of Lot 19 Fairview Beach, Scott County, Minn. Plaintiff claimed title to the Real Property in question by foreclosure of a Note and Mortgage Deed dated May 8, 1964 which Plaintiff claimed was in default at the time foreclosure proceedings were started.

The issues tried to the Jury were whether there was a lawful consideration and whether Defendant had waived his rights to complain about the consideration having paid on the Note for almost 3 years.

Mr. Morgan admitted that all of the money or credit which was used as a consideration was created upon their books, that this was standard banking practice exercised by their bank in combination with the Federal Reserve Bank of Minneapolis, another private Bank, further that he knew of no United States Statute or Law that gave the Plaintiff the authority to do this. Plaintiff further claimed that Defendant by using the ledger book created credit and by paying on the Note and Mortgage waived any right to complain about the Consideration and that the Defendant was estopped from doing so.

Now therefore, by virtue of the authority vested in me pursuant to the Declaration of Independence, the Northwest Ordinance of 1787, the Constitution of United States and the Constitution and the laws of the State of Minnesota not inconsistent therewith ;

The issues in this case were simple. There was no material dispute of the facts for the Jury to resolve.

Plaintiff admitted that it, in combination with the federal Reserve Bank of Minneapolis, which are for all practical purposes, because of their interlocking activity and practices, and both being Banking Institutions Incorporated under the Laws of the United States, are in the Law to be treated as one and the same Bank, did create the entire $14,000.00 in money or credit upon its own books by bookkeeping entry. That this was the Consideration used to support the Note dated May 8, 1964 and the Mortgage of the same date. The money and credit first came into existence when they created it. Mr. Morgan admitted that no United States Law Statute existed which gave him the right to do this. A lawful consideration must exist and be tendered to support the Note. See Ansheuser-Busch Brewing Company v. Emma Mason, 44 Minn. 318, 46 N.W. 558.   The Jury found that there was no consideration and I agree.   Only God can create something of value out of nothing.

Even if Defendant could be charged with waiver or estoppel as a matter of Law this is no defense to the Plaintiff. The Law leaves wrongdoers where it finds them. See sections 50, 51 and 52 of Am Jur 2nd “Actions” on page 584 – “no action will lie to recover on a claim based upon, or in any manner depending upon, a fraudulent, illegal, or immoral transaction or contract to which Plaintiff was a party.”

Plaintiff’s act of creating credit is not authorized by the Constitution and Laws of the United States, is unconstitutional and void, and is not a lawful consideration in the eyes of the Law to support any thing or upon which any lawful right can be built.

No complaint was made by Plaintiff that Plaintiff did not receive a fair trial. From the admissions made by Mr. Morgan the path of duty was direct and clear for the Jury.  Their Verdict could not reasonably been otherwise. Justice was rendered completely and without denial, promptly and without delay, freely and without purchase, conformable to the laws in this Court of December 7, 1968.

Note: It has never been doubted that a Note given on a Consideration which is prohibited by law is void.  It has been determined, independent of Acts of Congress, that sailing under the license of an enemy is illegal.  The emission of Bills of Credit upon the books of these private Corporations for the purpose of private gain is not warranted by the Constitution of the United States and is unlawful.  See Craig v. Mo. 4 Peters Reports 912.   This Court can tread only that path which is marked out by duty.    M.V.M.

Jerone Daly had his own information to reveal about this case, which establishes that between his own revealed information and the fact that Justice Martin V. Mahoney was murdered 6 months after he entered the Credit River Decision on the books of the Court, why the case was never legally overturned, nor can it be.