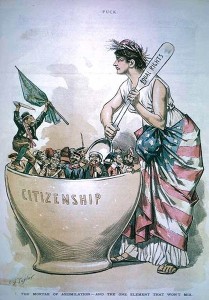 “The governments of the United States and of each state of the several states are distinct from one another.  The rights of a citizen under one may be quite different from those which he has under the other”.
Colgate v. Harvey, 296 U.S. 404; 56 S.Ct. 252 (1935)

“The rights and privileges, and immunities which the fourteenth constitutional amendment and Rev. St. section 1979 [U.S. Comp. St. 1901, p. 1262], for its enforcement, were designated to protect, are such as belonging to citizens of the United States as such, and not as citizens of a state”.
Wadleigh v. Newhall 136 F. 941 (1905)

I can remember reciting the pledge of allegiance as a child in the public elementary school each morning at the start of class. Hand over heart I would say, “…and to the Republic for which it stands, ONE NATION, under God, indivisible, with liberty and justice for all”. Every morning repeating the same thing; I come to grow up and discover that the United States of America is not ONE NATION.  This erroneous idea has colored the understanding and perceptions of American society and, en masse, has fed our ignorance with regards to who we are in relation to government.

Here are a few presumptions that are erroneous; the federal government is superior to the States of the Union, federal law supersedes State law, the United States of America is one nation. None of these presumptions are fact and truth. These are false.

Here is what’s really going on as it always has been since the inception:  The Declaration of Independence created not one, but thirteen brand new nations or countries, the United States of America is a collection of nations banded together for a common purpose, the federal government has only limited authority that is separate, distinct and foreign to the States of the Union, the U.S. Constitution which is the offspring of the Declaration of Independence and the Articles of Confederation, requires that the federal government is still a government of limited, enumerated authority.

It is historically and politically incorrect, as well as contrary to the determination of the U.S. Supreme Court, to refer to American Society as a nation or a country. It is proper to refer to the American political alliance as a society as the United States of America is an alliance of nations, a confederation of sovereign states; each State in the Union is separate, distinct and foreign to every other as the laws of one State do not operate within the borders of any other state. The two ways by which Acts of Congress become operable within any State of the Union are via the U.S. Constitution and by cession.

Each state has the status of any other nation on the world scene, each state in our Union has its own constitution, its own land over which it exercises jurisdiction, its own citizens, its own legislative, executive and judicial branches of government, police powers, prison system and military (both the states militia and the National Guard are under control of the governor of the State as commander-in-chief).

This leaves one born in any of the fifty states with options of citizenship. Because each State of the Union has a separate sovereignty from that of the United States government, there are at least two types of citizenship in America. State citizenship and United States citizenship. While most Americans readily and unwittingly claim to be U.S. citizens, the provisions of these two types of American citizenship are distinct from each other. I personally prefer to not use the term citizen at all  and use state national instead. Today the term is presumed  to mean the US Citizen, to avoid any confusion, one has nationality with their respective nation-state that they were born in and can utilize the title of state national if/as they see fit.

“That there is a citizenship of the United States and a citizenship of a state, and the privileges and immunities of one are not the same as the other is well established by the decisions of the courts of this country”.

Sources include but not limited to: Cooperative Federalism by Gerald Brown, Ed.D