The Redemption Manual is an invaluable asset to the redemption process, but more importantly, it provides a connection of the dots, by providing valuable history as to legislation and other factors where we have been concerned and allowing that responsible for altering our state of being.

The Redemption Manual covers UCC1 Finance Statement, Commercial Security Agreement, Schedule A documents, and a plethora of affidavits which address a wide variety of pertinent situational documents. A great deal of history is bestowed within the pages, how the constitution has been changed to be utilized to means other than for the advancements to the current earth civilization. 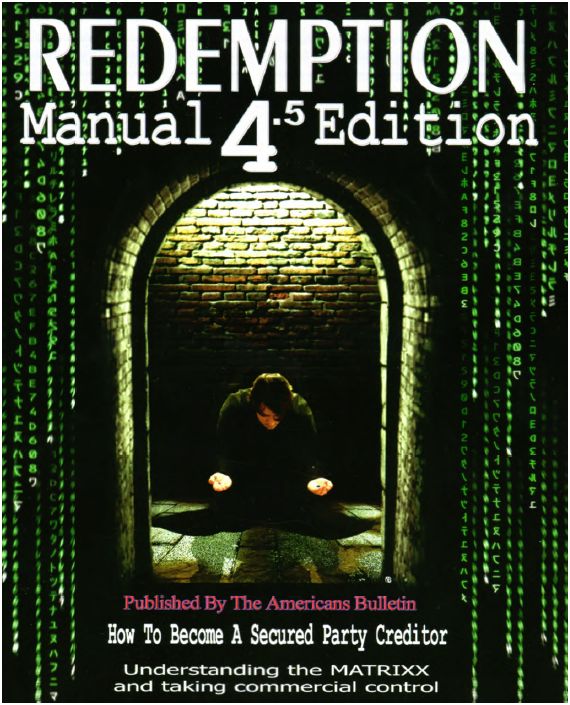 The plans have been thwarted and the knowledge how best to bring about positive change for our good and the good of all concerned, and the populous of the planet, we call earth.
As we all have been seemingly living our lives as free individuals, we come to realize that, as United States Citizens and by this it is referenced, rather to our true relationship to our selves relationship to the CORPORATION – UNITED STATES OF AMERICA; this has merely been an assumption, and the truth is actually quite the contrary, for how can one be a citizen of a Corporation? It becomes clear, that the plans have been planned for much longer than we could ever know. We come to find and now know that through a multitude of ever increasing Corporate governmental maneuvers, we have actually in many instances, due to lack of transparency and outright trickery, we have most voluntarily given up many of our rights, and we are actually erroneously acting as FEDERAL GOVERNMENT EMPLOYEES, government AGENTS. Having given away even our children to a system which has held many misconceptions, we are now given these tools of Redemption. Empowered by the workings, skill and ingenious compilation of The Redemption Manual it is quite clear for me to know, and to share that truly there is someone up there who loves us, and in fact very much so…for it has all been put together succinctly and with the utmost of care, why would others take such care in providing the remedy in such a manner as not to be mistaken in its’ purpose—to create and restore a new version of conducting our lives, in a world which is moving toward debt forgiveness, peace, and thus prosperity for all.

The Redemption Manual advises, and I agree that one should be in full understanding of the content of any of the covered documents, rather than simply entering their personal information. Every life circumstance is different, and thus your documents should contain your personal imprint, in whatever form this is expressed by you. In order to redeem ourselves and the generations to come, surely we must endeavor to find and utilize these remedies to make ourselves whole. The Redemption Manual is one of the many sources of learning on the topic of Redemption, Sovereignity, Free Man on the Land, and Accepted for Value, as well as a detailed history lesson and copies of the legislation for inclusion to back certain documents…The Redemption Manual should be thought of with a BIG FAT RED BOW! When you are ready this material shall present itself, for this is the way that life unfurls, only when you are ready, shall the key be revealed to you.

Presented in a step-by-step format The Redemption Manual is best utilized in an environment where one has unlimited access to the internet and/or Blacks Law Dictionary, which is currently up to a 9th Edition. In essence it involves contract law also referred to as Tort Law. So buckle up, for it shall behoove anyone to learn at least basics where their Life, Liberty, and Pursuit of Happiness and Prosperity are concerned. The reading is fairly intensive, but once you have read things several times over and applied some analogies, you can actually start to wrap your head around what will prove to be a new paradigm in forming the reality for our upcoming societies. The new governance of our country and ultimately the world, will endorse the education and utilization of these protocols for living in a world of COMMERCE.

The Redemption Manual makes reference to the Bible, and if one is coming form a place other than Christianity, let this not discourage one from discovering the truth, for there is only one God, and to denounce the existence of God, or to believe we are more than God, is the very essence of how these circumstances came about to being in the first place. We are not here to rule over one another, to police one another, or to benefit over the enslavement of entire races. A war of Commerce has been declared upon us, can you see clearly? The declaration of peace lies within these documents as well.

There are many including myself, who have a propensity for absorbing the knowledge, contained within The Redemption Manual and who have gone through and are continuing to move through the act of claiming our Sovereignty and operating through a life of commerce. We consider ourselves as facilitators. We utilize these truths and act benevolently towards others by providing assistance in moving through theses processes, which may seem daunting and possibly scary at times, yet; Franklin D. Roosevelt stated “We have nothing to fear but fear itself”. This coming from a president that was instrumental in the passing of HJR 192, which is our remedy for the crimes committed upon us, and continue to forge forward to the future with renew hope, through forgiveness and right action. Our practices differ from the practices of the Attorneys, in that we are more stewards and mentors, here to assist and guide in a very transparent manner of business, we are here to set out guiding you to become your own Attorney In Fact. Now, we have been provided with the proper knowledge and sound tools, we can learn to live without the need to harm ourselves or others, how to pass GO, and how to collect, create, and preserve our private $$$, our private property, and thus anything we create in private including and most importantly our children and generations to come.

A major event which is determined to have contributed to mass slavery, is our almost blind entrance into contracts (on a daily basis) which have been fraudulent due to many reasons, most commonly the non-disclosure of the truth. Women have been tricked registering the births of their children for decades. Subsequent registrations of all genre, and the perpetuation of these practices have been passed on through the generation to our heirs, with trust and good faith in our country and what it is was believed to be founded upon, FREEDOM! Hilter was much more obvious in his approach to numbering; however, My birth certificate was recorded (3) days after my DOB As The Redemption Manual points out, our birth certificates, the ones held with our birth states Vital Records department, given that they are printed on Bond paper, very clearly have (3) barcodes and three sets of numbers assigned to it. Begs an answer to this question: Is the Birth Certificate itself a commercial instrument, a Promissory Note or other instrument of value? The Redemption manual gives clarification to the reality that we as beings (note, I do not use Human Beings) have come to create for ourselves, rather unbeknownst to us. Most of the deception has gone on right under our noses, yet either because we had been pre-occupied in entertainment or restricted by our self created shackles, were unable to prevent to multiple face lifts to the constitution, which have resulted in something unrecognizable.

Although the truths go even farther back than we can fathom, The Redemption Manual touches upon the key dates, such as June 5,1933 and the passing of HJR-192. Then we can move on into the future with more knowledge and power in creating a world where we are all truly free.

Make sure you get on our webinars to learn what was left out of The Redemption Manual and get all the updates for becoming sovereign.