I’m starting a movement to encourage people to pay for as many things as possible with POSTAL MONEY ORDERS!  Postal Money orders that are *Not Signed or Endorsed* are not only backed by Gold, but if transferred in your private capacity to another private party for a payment of a debt, offer many potential advantages to operating in private with the exchange of bills of exchange that can also be re-venued into public/FRN’s readily.

When these International-bills exchange hands, it does NOT increase the national debt and create a novation, and (according to my overstanding) there is no income tax owed on payments received nor is there an obligation to file a 1099/report of income to the IRS for money order payments in this form (blank/not endorsed). (Must NOT be deposited, but either kept or transferred to another party). p.s. This is my opinion and I am not a tax professional or accountant, so don’t take my word for it and I am *Not* giving tax or legal advice here. But research it and you might come to the same conclusion…

If you want to End the Federal Reserve but are still using Federal Reserve Notes, you need to wake up and get with the program!! You protest the federal reserve everyday yet use their currency?  Be part of the SOLUTION instead of the PROBLEM!

The reason the U.S. can collect taxes owed (via a third party debt collecting agency known as the Internal Revenue Service/IRS) is because it is the ORIGINAL ISSUER of the currency. It prints it off its machines, and issues it, so it can Redeem it *All* back at any time it wants….every dollar you earn can be collected back. Give back to Cesar what is his…

But they don’t do that because then everyone would boycott… they only ask for 20-50% of your earnings back to them, depending on the TAXPAYER STRAWMAN’s tax-bracket.

So – Why are people all over protesting and legislating in an effort to “End the Fed” ???   Because the owners of the Federal Reserve are CONTROLLING  (Being the Creditors), the United States and it’s territory and possessions (that means you and your possessions, including your body via the Birth Certificate Contract that made you collateral for the national debt).

Several years ago… Patriots/Libertarians started the “LIBERTY DOLLAR” as a form of alternative currency, and guess what? The U.S. shut it down and confiscated it and is trying to put the founder behind bars for 20 years. 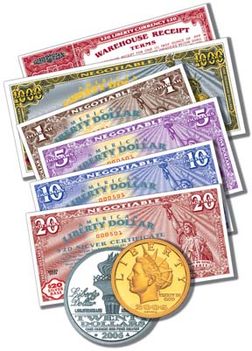 Well…here is another solution – if everyone were to pay with Postal Money Orders (not endorsed to anyone) and we were to circulate these as bills everyday instead of Federal Reserve Notes…. 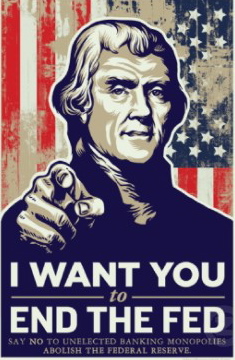