Published April 18, 2013 | By understand contract-law and you win 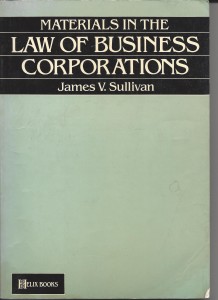 This blog is an excerpt from the book titled MATERIALS IN THE LAW OF BUSINESS CORPORATIONS by James V. Sullivan and is used here for informational purposes only. It is an introduction to the origins of the artificial person.

The concept of a union of persons recognized as a body separate and distinct from the individuals who compose and govern it, and capable of owning property as a continuing body despite the addition of new members or the deletion of former members, goes back to Roman law. It was limited in its origin to public institutions such as towns and municipalities created as governmental units by the supreme sovereignty of the Senate. It was above all a convenient concept, a theory for the ownership of public property.  After the concept of the municipal corporation had developed, it was transferred in the days of the Empire to private bodies which could be created for business purposes by express permission of law, i.e. with the consent of the Emperor. Such bodies could hold corporate property, have corporate funds, be managed by an agent for the group. The corporate body could sue and be sued, make business contracts, and the members were not liable for the debts of the corporation. Transferability of the interests of the members seems to have been recognized. The state having granted this privilege could revoke it and dissolve the corporation.

Antedating the concept of the artificial corporate body created by the state was the entirely natural concept of the partnership created solely by the consensual contract of its founders. This form of association exemplified the ordinary legal concept that responsibility for the obligations of a business rested upon the individual members who create and own it. Thus we see stemming from the same Roman sources the two concepts of business associations; one with liability limited to the corporate property and the other embracing without limitation the individual property of the associates. The idea that liability could be limited to the corporate property, as an exception to the ordinary rule of liability visited upon the investing associates themselves, and thus requiring a special grant of immunity by the sovereign, runs, even at this early stage, through the law of business organizations.

Feudal and medieval times seem to have perpetuated the idea of the public corporation in town and church organization. Partnerships and related forms of association were the accepted forms of business organization. The private corporation for business purposes appears to have largely disappeared for many centuries.  At a later period, in the Age of Discovery, a quasi-public type of business corporation developed consisting of a merchant group, operating under charter from the sovereign, often organized to exploit a monopolistic grant to trade in a particular location and frequently with the rights of self-rule and the right to colonize and govern, e.g. the East India Company.

Deriving from the law of partnership and largely contemporary with the later development of the quasi-public type of business corporation was the joint-stock association. In this form of organization a large group of investors (generally too numerous for ordinary partnership management) would sign articles of association under a business name in which each investor put in capital and received participating shares in a number proportionate to the amount of capital units invested, agreeing to participate in management only through elected agents, it being understood that the shares were transferable and descendable to heirs without dissolving the basic association. Thus the organization had a kind of continuity similar to a corporation but there was no legislative grant of limited liability and hence the joint-stock association was in effect an out-size partnership.

If what was in effect a joint-stock association was deemed to serve a public interest it could ask for and sometimes obtain a charter from the legislature or sovereign granting limited liability and a real corporate existence. Thus, in colonial times and in the early days of the United States, there existed true public corporations, towns, colleges, turnpike and ferry companies specifically chartered as corporations by sovereign grant or legislative act, quasi-public corporations, e.g. banks created by legislative act, and private companies, partnerships or joint-stock associations, with no government charter and with unlimited liability.

The growth of private corporations for business purposes is in the half-century centering around the Civil War,  largely a history of the relaxation of restrictions on the formation of private business corporations…