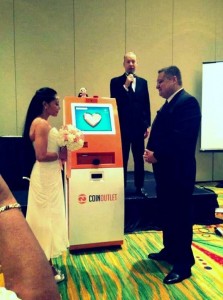 A new virtual era has arrived in the United States. The first “blockchain wedding” was held on Sunday, August 5, during a bitcoin conference at Disney World in Orlando, Florida. The marriage was performed and registered without the involvement of any government or religious organization, and instead submitted to an online public registry: the bitcoin blockchain.

The blockchain is a decentralized, secure database that allows transactions to be seen by other users. This technology allows users to send digital currency like bitcoin, or specific documents and messages that are incorporated into the database. The blockchain offers complete transparency over all user transactions.

David Mondrus and Joyce Bayo, who had already been married in a civil ceremony, made history by submitting their nuptials to the blockchain. The wedding was broadcast live via the libertarian social media network Liberty.me, whose founder and director, Jeffrey Tucker, presided over the ceremony.

“For better or worse, ’til death do us part, because the blockchain is forever,” read the couple’s message recorded to the blockchain. The groom told Tucker in an interview that he considers marriage more of a promise than a contract.

During the ceremony the newlyweds “burned” 0.1 bitcoins (US$32.5) using a bitcoin ATM, officially and permanently submitting their wedding vows to the database.

After offering the traditional “I do,” the couple displayed the QR code of their “transaction” — a sign of the permanence of their vows that will exist as long as the internet.

“We believe that like the blockchain, our love and marriage are forever and that our relationship is not defined by governments or the church. So enshrining our commitment to each other in the blockchain in front of our friends is very dear to us,” Mondrus said in a press release.

Mondrus is the CEO of RedboxJewels.com, an online store that offers customers the option of using bitcoins to purchase jewelry. He is also an adviser to Bitnation, a newly founded decentralization services company. The company allows all types of contracts to be stored on the blockchain, from wills and divorces, to prenuptial and commercial contracts.

Through the use of a “smart contract,” a couple can upload their marriage certificate and associate it with a shared bitcoin wallet, identifying in advance clauses that will be automatically executed if certain conditions are met in the future.

In an interview with the PanAm Post, Matt Gilliland, blockchain wedding attendee and program coordinator at Liberty.me, described the wedding as a “marriage of ideals.”

“[These are] two people who love each other very much — the groom glowed when he and I talked about his wife — announcing to the world that they need no permission to record their commitment to one another. Jeffrey Tucker gave a wonderful speech, and definitely got a few people’s tear ducts flowing. The record in the blockchain is merely vows — no contract — but it’s an important symbol of their pledge both to one another and to the fight for freedom.

Gilliland added that he believes this wedding was an important first step: “In future years, we’ll have real, enforceable contracts between loving partners encoded in the blockchain.”

Sunday’s wedding not only highlighted technological advances permitted by blockchain transactions, it also deepened debate surrounding the state’s role in the registration, execution, and enforcement of contracts between individuals.

Tucker says these developments will resolve many marital problems, if the state will relinquish control of the institution of marriage. According to the writer and entrepreneur, the private affairs of individuals should be managed by private laws and voluntary agreements. Disputes, which will always exist, could be negotiated between private arbitrators.

In a column on Liberty.me, Tucker explained that in the world we live in today, couples who want to marry must navigate a variety of bureaucratic obstacles.

“Moving agreements to the blockchain detaches the vows from the court system, the political system, jurisdictional geography, and third parties in general, among which the state itself,” he writes. “It’s a form of privatizing your own marriage, transferring it from the public sector to the realm of private decision making — the two people who actually make the marriage happens — where it belongs.”