Published April 29, 2013 | By understand contract-law and you win 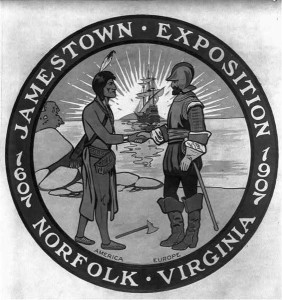 The Jamestown Exposition – Teddy Roosevelt’s message of govern yourself or be governed.

This is really the crux of any and all of our issues. For the length of this life it comes down to us being in posession of our own minds, being director of our own behavior and actions…being responsible for all of that. If we do not assume the status of  captain of our own ship, writer of our own script and director of our own movie, others will fill these positions for us consciously or unconsciously through conditioning, learned behaviors, habitual thoughts picked up by others along the journey of life etc. Theodore Roosevelt spoke of self governance on several occasions including his talk at The Jamestown Exposition in 1907 .

It behooves us to remember that men can never escape being governed. Either they must govern themselves or they must submit to being governed by others. If from lawlessness or fickleness, from folly or self-indulgence, they refuse to govern themselves, then most assuredly in the end they will have to be governed from the outside. They can prevent the need of government from without only by showing that they possess the power of government from within. A sovereign cannot make excuses for his failures; a sovereign must accept the responsibility for the exercise of the power that inheres in him; and where, as is true in our Republic, the people are sovereign, then the people must show a sober understanding and a sane and steadfast purpose if they are to preserve that orderly liberty upon which as a foundation every republic must rest. (At Jamestown Exposition, April 26, 1907.) Mem. Ed. XII, 593; Nat. Ed. XI, 312.

Here is more from Roosevelt regarding self-governance:

The absolute prerequisite for successful self-government in any people is the power of self-restraint which refuses to follow either the wild-eyed extremists of radicalism or the dull-eyed extremists of reaction. Either set of extremists will wreck the Nation just as certainly as the other. (September 12, 1918.)

Roosevelt in the Kansas City Star, 213. SELF-GOVERNMENT — RESPONSIBILITIES OF. You cannot give self-government to anybody. He has got to earn it for himself. You can give him the chance to obtain self-government, but he himself out of his own heart must do the governing. He must govern himself. That is what it means. That is what self-government means. . . . There must be control. There must be mastery, somewhere, and if there is no self- control and self-mastery, the control and the mastery will ultimately be imposed from without. (At University of Wisconsin, Madison, April 15, 1911.) Mem. Ed. XV, 548; Nat. Ed. XIII, 594.

When I say that I believe not only in the right of the people to rule, but in their duty to rule themselves and to refuse to submit to being ruled by others, I am not using a figure of speech, I am speaking of a vital issue which fundamentally affects our whole American life. I not merely admit but insist that in all government, and especially in popular government, there must be control; and, furthermore, that if control does not come from within it must come from without. Therefore it is essential that any people which engages in the difficult experiment of self-government should beable to practise self-control. There are peoples in the world which have proved by their lamentable experiences that they are not capable of this self-control; but I contend that the American people most emphatically are capable of it. I hold that in the long run, taken as a whole, our people can and will govern themselves a great deal better than any small set of mencan govern them. (At St. Louis, Mo., March 28, 1912.) Mem. Ed. XIX, 234; Nat. Ed. XVII, 172.

SELF-GOVERNMENT AND TYRANNY. The truth is, that a strong nation can only be saved by itself, and not by a strong man, though it can be greatly aided and guided by a strong man. A weak nation may be doomed anyhow, or it may find its sole refuge in a despot; a nation struggling out of darkness may able to take its first steps only by the help of a master hand, as was true of Russia, under Peter the Great; and if a nation, whether free or unfree, loses the capacity for self-government, loses the spirit of sobriety and of orderly liberty, then it has no cause to complain of tyranny; but a really great people, a people really capable of freedom and of doing mighty deeds in the world, must work out its own destiny, and must find men who will be its leaders—not its masters. (1900.) Mem. Ed. XIII, 458; Nat. Ed. X, 334.