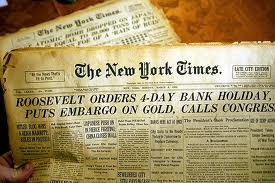 Before HJR 192 was passed, Executive Order 6102 was signed into effect by President Roosevelt. This executive order required all gold and gold certificates to be surrendered to the  federal government by May 1, 1933. House Joint Resolution 192 was then passed by Congress on June 5, 1933. This law was passed to do away with the gold clause in the constitution and in all public and private contracts.

1933 was also when the United States went bankrupt, which was not the first time that it went bankrupt. In fact, the United States was so far in debt that it went bankrupt two additional time previously – once in 1789 (forming the Constitution so the state’s could sign on as security for the fed’s debts), and then in 1861 (when the Southern State’s said “No More” and wanted to succeed rather than sign on to another pledging of assets to pay the federal governments debt).

Then, in 1933, and with HJR192, they took all the Gold, all the true money, all the property (and instituted eminent domain and property taxes/divided land titles), and instituted the income tax to control the labor of the people. In addition, with HJR 192 is when they instituted the Birth Certificates to control the people and have the future American people become the collateral for all the federal governments debts. Yes…that’s right – your birth certificate is the TITLE to your body and it has been pledged as an asset. The holder has the right to the taxes and fines, fees, etc that you pay to the government through judgments, court cases, payroll, income taxes, property taxes, etc.

From the very beginning, the government was indebted to European bankers as a result of the revolution. How ironic that we had to borrow money from England to pay for the war we fought against them.

So, fast forward to the early 1900’s and you’ll come across several key events that make it quite obvious there was a master plan at work to enslave the people. If you read a book named The Creature From Jeckyll Island, you’ll become intimately acquainted with the happenings in the year 1910, when 6 men, who were either elite bankers and/or politicians, met in secret in a place named Jeckyll Island. The purpose of this meeting was to formulate plans for economics reforms for the United States. This is where the banking cartel began in this country. The idea of a central bank had always been rejected, and so the men who met on Jeckyll Island, needed to come up with a way to trick the people into allowing a central bank to be instituted.

Three years later, in 1913, President Wilson signed the Federal Reserve Act into effect, which is the current central bank in the United States, even though it is actually not governed by any agency of the Federal Government. Eight years later, in 1921, the Maternity Act was passed which required all birth to be registered with the state. So, now all key pieces were in place for the upcoming bankruptcy default and restructure.

In 1933, when the Federal Government went bankrupt, they passed EO 6102 and HJR 192 and pledged us as collateral to back the government debt.

They made us slaves. But they couldn’t technically make us slaves, because that would be illegal. So, they had to give us a remedy. So what is the HJR 192 Remedy? It is that the government has the obligation to discharge and settle any debts we may incur in our daily lives. Yes, this includes mortgages, car loans, utilities, etc…

But wait! Wasn’t HJR 192 repealed?  Technically, it was but the provisions that brought us into having no money of substance still exist and apply. In other words, we didn’t go back to using “real money” (gold/silver) again; and therefore, the maxim of “whoever brings the obligation must bring the remedy” still applies. So, the government still has the fiduciary duty to discharge and settle your debts, because we still don’t have access to money of real substance, AND because the USA is still in bankruptcy mode. So, the Secretary of the Treasury is still the “Receiver” in a Bankruptcy. Your birth certificate is still a bond and your debts are still prepaid by your future labor, property, and taxes that they are assuming the Administration of as the Office of the Executor of the ESTATE of the ALL CAPS JOHN H DOE name. They still hypothecated the Birth Certificate and made Billions of the birth (or Naturalization) of every new citizen. In fact, in every court case over $7,000, there are new bonds created and traded off your BC ESTATE.

Okay, so now that we know this information about HJR192, can we just write something like “Discharge According to HJR 192” on a bill and call it a day?

The short answer is No. We cannot just simply scribble some words at a 45 degree angle (like other guru’s are teaching) across a bill and think that we are done, and we never have to pay FRN’s for our bills ever again. This is why those who are not fully informed call this the HJR 192 scam, because it isn’t easy breezy, wham bam thank you ma’am. The fact of the matter is this is just the tip of the ice berg, and the rabbit hole goes far deeper than any of us ever imagined. If we really want to change our lives, it will take massive amounts of studying and a healthy dose of trial and error. We need to educate ourselves not only on the history of how this all came about, but also stay on the forefront of new technologies that can be used to change our status and obtain our remedy as close to 100% of the time as possible.

If you are interested in learning more about everything from the history and inception of the strawman to the latest and greatest on how to change your status, to how to use what HJR192 gave us, and actually be able to use these remedies (and to talk/learn to other people who are using them), be sure to join our email list to receive regular updates.

The number one thing you can do right now to learn more is to request a download of our FREE 8+ Hour Video De-Programming Series  here that will help you jump start your knowledge and your path back to freedom. Remedies from HJR 192 and across the board will be taught in detail.

Or, jump right to our thorough section on Discharging Debt with HJR192 as a Remedy (called a “Private Administrative Process”).