Due process of law

Published June 12, 2013 | By understand contract-law and you win 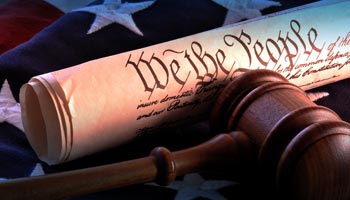 “…nor shall any State deprive any person of life, liberty, or property, without due process of law…AMENDMENT XIV, SECTION 1

due = something owed; in accord with a right or convention. Customary; regular

process = A series of actions, motions, or occurrences; a method, mode, or operation, whereby a result or effect is produced; normal or actual course of procedure; regular proceeding; prepare by special process; begin legal action against

law =  a binding custom or practice of a community; the whole body of such customs, practices, or rules; that which is laid down

The constitutional guarantee of due process of law, found in the Fifth and Fourteenth Amendments to the U.S. Constitution, prohibits all levels of government from arbitrarily or unfairly depriving individuals of their basic constitutional rights to life, liberty, and property. The due process clause of the Fifth Amendment ratified in 1791, asserts that no person shall “be deprived of life, liberty, or property, without due process of law.” This amendment restricts the powers of the federal government and applies only to actions by it.

Both the Fifth Amendment and the Fourteenth Amendment to the United States Constitution prohibit governmental deprivations of “life, liberty, or property, without due process of law.” The phrase “due process of law” first appeared in the fourteenth century with a very narrow and technical meaning involving the service of appropriate writs. The American Founding generation likely identified the Fifth Amendment’s Due Process Clause with the clauses, prevalent in state constitutions in 1791, that required governmental deprivations of life, liberty, or property to conform to “the law of the land.” Thus, securing the principle of legality by ensuring that executive and judicial deprivations are grounded in valid legal authority. In this respect, the Fifth Amendment’s Due Process Clause limits the substance of executive or judicial action by requiring it to be grounded in law.

In Chicago, Burlington & Quincey Railroad Co. (1897), the Justices unanimously determined that the Due Process Clause required the states to provide just compensation when they acquired private property for public use.

When a person is treated unfairly by the government, including the courts, he is said to have been deprived of or denied due process.

Due process equates to the “law of the land. The term in a constitutional provision that `no person ought to be taken, imprisoned, or divested of his freehold, liberty or privileges, or outlawed or exiled, or in any manner deprived of his life, liberty, or property but by the law of the land,” is synonymous with due process of law. State V Balance, 229 NC 764, 51 SE 2d 731, 7 ALR 2d 407″

“No free man shall be seized or imprisoned, or stripped of his rights or possessions, or outlawed or exiled, or deprived of his standing in any other way, nor will we proceed with force against him, or send others to do so, except by the lawful judgement of his equals or by the law of the land.”

Delaware Declaration of Rights and Fundamental Rules Sources of Our Liberties, The Founders’ Constitution, September 11, 1776

For more on due process of law see: