Published March 8, 2013 | By understand contract-law and you win 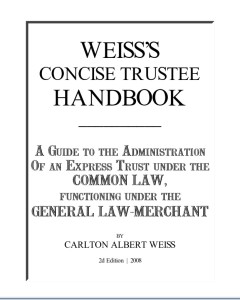 A GUIDE TO THE ADMINISTRATION OF AN EXPRESS TRUST UNDER THE COMMON LAW, FUNCTIONING UNDER THE GENERAL LAW MERCHANT BY CARLTON ALBERT WEISS

First and foremost, anyone (man or person) capable of taking physical possession of or legal title to property can be a trustee.  And there is no limit to the number of trustees who may serve in any one trust. Generally, where there is more than one trustee, the trustees, with respect to each other, are referred to as co-trustees, and when acting jointly as a collective body are referred to as the Board of Trustees.

Furthermore, there is no law prescribing the character of a trustee, and while it has been held that a trust cannot be invalidated simply due to incompetence, the trustee should be at least someone capable and fit for executing the powers and duties honorably. (This the basis for the general rule that beneficiaries are not desirable as trustees, though there is no law to forbid such appointment. Equity will generally avoid all temptation to a breach of trust.) The trustee should be stationed within the jurisdiction of the court of equity in which the estate is located, if indeed the trust corpus is an estate.  But where the trust corpus is portable land, the trustee need not be stationed within any single jurisdiction.  Non-residency will not disqualify or preclude the trustee from carrying out his position.

As far as accepting the appointment is concerned, this should be done formally, expressly in writing, even though it will always be implied if the individual intermeddles with the trust property, or performs any act to carry out the trust.  Once acceptance has been tendered, no court of common law or equity can prevent the trustee from holding that office except for breach of trust or good cause dependent upon clear and lawful necessity. Removal must be procured pursuant to the provisions of the declaration, or, where no such provisions are made, by decree of a court of equity.

Lastly, it should be noted that the office of trustee is not always a desirable one. When the trust instrument conveys a burdensome obligation, the trustee is miserable and at risk of breach by failure to perform; when the trust instrument has been constructed poorly, the trustee is miserably confined and inhibited and he may well be held liable for trust contracts with outside parties. The trustee has a duty of care toward the beneficiary(s), and must harbor no biases or resentment in administration; therefore, it is prudent to empower the trustee with enough discretion to carry out his position to the best of his ability and responsible creativity. To put it plainly, the settlor must trust the trustee to carry out his duties, and use his powers justly.

POWERS & DUTIES OF THE TRUSTEE

THE POWERS of a trustee are divided into three categories: general, special and discretionary. The general rule are all those inherent in trustees virtute officii, i.e. ordinarily conferred by trust law; the special are all those conferred by the trust instrument; and the discretionary are all those arising out of the necessity of personal judgment (though broad discretion may also be conferred by law and as well as by trust instrument).  It is well-settled law that under a declaration of trust, the trustees must have all the powers necessary to carry out the obligation of that private contract which they have assumed.

Furthermore, it is settled that the trustees of an Express Trust are afforded greater latitude to carry out their duties than ordinary trustees. The trustees are empowered to control every aspect of the trust according to the trust instrument and equity, and retain the  power to remove even the beneficiary(s) from the premises. These powers include, but are in no way limited to-

*The power to bind the trust in a contract, especially where such obligation is implied-by-law, and the power to contract with the beneficiary(s);

*The power to partition, exchange, sell, pledge or mortgage the trust property, either in whole or in part;

*The power to lease trust property;

*The power to issue, change, or otherwise dispose of securities of the trust;

*The power to support the beneficiary(s) in all reasonable manner;

*The power to prosecute and defend in the trust’s name or trustee’s name;

*The power to make gifts out of trust property;

*The power to delegate all unessential powers and duties; and

*The power to exercise personal judgment and every discretionary power not prohibited by the trust instrument. He may do whatever a man or woman may lawfully do according to natural right.