Published February 17, 2013 | By understand contract-law and you win 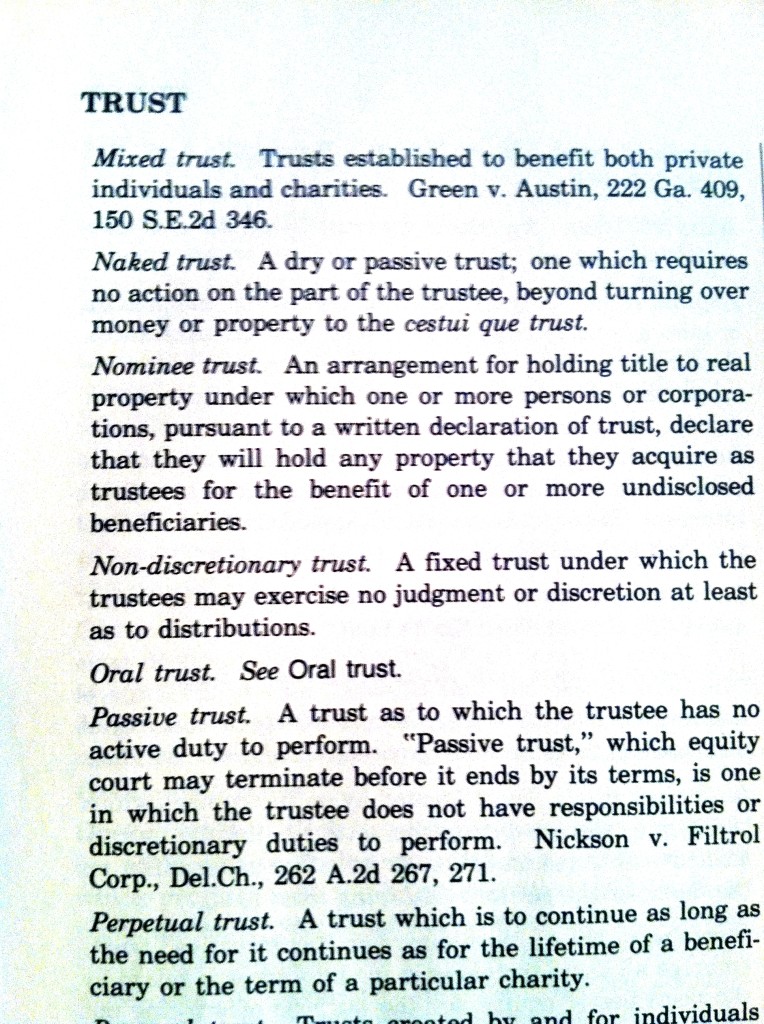 Any arrangement whereby property is transferred with intention that it be administered by trustee for another’s benefit; A fiduciary relationship in which one person is the holder of the title to property subject to an equitable obligation to keep or use the property for the benefit of another.

Essential elements of a trust are designated beneficiary and trustee, fund sufficiently identified to enable title to pass to trustee, and actual delivery to trustee with intention of passing title.

An association or organization of persons or corporations  having the intention and power, or the tendency, to create a monopoly, control production, interfere with the free course of trade or transportation, or to fix and regulate the supply and the price of commodities. In the history of economic development, the “trust” was originally a device by which several corporations engaged in the same general line of business might combine for their mutual advantage, in the direction of eliminating destructive competition, controlling the output of their commodity, and regulating and maintaining its price, but at the same time preserving their separate individual existence, and without any consolidation or merger.

This device was the erection of a central committee or board, composed, perhaps, of the presidents or general managers of the different corporations, and the transfer to them of a majority of the stock in each of the corporations to be held “in trust” for the several stockholders so assigning their holdings. These stockholders received in return “trust certificates” showing that they were entitled to receive the dividends on their assigned stock, though the voting power of it had passed to the trustees. This last feature enabled the trustees or committee to elect all the directors of all the corporations, and through them the officers, and thereby to exercise an absolutely controlling influence over the policy and operations of each constituent company, to the ends and with the purposes above mentioned. Though the “trust”, in this sense, is now seldom if ever resorted to as a form of corporate organization, having given place to the “holding corporation” and other devices, the word became current in statute laws as well as popular speech, to designate almost any form of combination of a monopolistic character or tendency.

In a looser sense the term is applied to any combination of establishments in the same line of business for securing the same ends by holding the individual interests of each subservient to a common authority for the interests of all.

A trust, as the term is used in the Restatement, when not qualified by the word “charitable”, “resulting” or “constructive”, is a fiduciary relationship with respect to property, subjecting the person by whom the title to the property is held to equitable duties to deal with the property for the benefit of another person, which arises as a result of a manifestation of an intention to create it.

Trust indenture – The document which contains the terms and conditions which govern the conduct of the trustee and the rights of the beneficiaries. Commonly used when a corporation floats bonds.

Trust instrument – The formal document which creates the trust and contains the powers of the trustees and the rights of the beneficiaries. It may be a deed in trust or a formal declaration of trust.

Trust property – The property which is the subject matter of the trust. The trust res (q.v.). See also Principal

Trust res – The property of which the trust consists. It may be real or personal and the trustee has legal title. See also Principal.