Published February 13, 2013 | By understand contract-law and you win 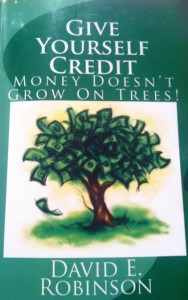 Recommended Reading Regarding REMEDY: Excerpt from the book Give Yourself Credit Money Doesn’t Grow On Trees by David E. Robinson

We The People Provide The Credit

“No state shall…make any thing but gold and silver coin a tender in payment of debts…” Art. 1, Sec. 10, clause 1 of the Constitution For the United States of America and the CONSTITUTION OF THE UNITED STATES, INC.

In order to circumvent this constitutional rule and in order to make paper Federal Reserve Notes (FRNs) “a tender in payment of debts” Congress turned to its “power…to borrow money on the credit (of the people)of the United States.” – Art. 1 Sec. 10, clause 1.

Since congress borrows “money substitutes” (FRNS) on the basis of my credit since I am one of the people of the United States, Congress gives me an unlimited credit exemption that I can use to discharge the debts that I cannot pay with FRNs because FRNs are not “real money of account of the United States” that “pays” debts. Congress permits me to use my personal credit exemption to pay charges that FRNSs can only “discharge.”

Part four of the 1040ES instruction booklet under “Estimated Tax Worksheet” in reference to “exemptions” says: “If you can be claimed as a dependent on another person’s return your personal exemption is not allowed.”

We the people are the source of the commercial energy that our credit represents.

We the people provide the credit for every instrument that we endorse the very instant we endorsed it.

All taxes are interest payments that accrue from the principle of the lenders of personal credit (meaning us) to the lending institutions of the corporate UNITED STATES, and these interest payments must be returned to the lenders of personal credit (to us), when so claimed, for the close of escrow lest we be found guilty “for failing to make the return”.

My credit exemption is assured; it is my supersedeas bond because:

The United States and its subdivisions (which municipalities are) has been operating in a Chapter – 11, bankruptcy reorganization since 1933, and since there was not enough gold, and silver (“money of account of the United States”) to back the nation’s currency, pay, its debts, and enable the businesses of the country to pay theirs, Congress passed laws that replaced the substance money needed to pay debts with the unredeemable, paper promissory notes of the Federal Reserve Bank.

Ordinarily this would have been a gross violation of the US Constitution that requires our currency to be backed by gold and silver coins, but it is not a violation of the Constitution in a bankruptcy reorganization which is a temporary suspension of normal obligations by law; for the protection of the debtor (the corporate UNITED STATES) from its creditors (we the people of the United States).

When Treasury notes come due they are not paid, but are refinanced by new T-Bills to back the currency and cover the debts.

You can’t do that with debt that you owe unless you are protected from creditors in a bankruptcy reorganization that is regularly and constantly being restructured to keep the organization alive.

Congress legislated that the new money shall be backed by “the credit of the United States” and represent “a mortgage on all the…property of the people in the nation.”

So who holds the mortgage?

Under the Constitution and laws of equity the United States could not borrow or pledge the property and wealth of its private citizens and put them at risk as collateral backing the nation’s currency and credit, except in bankruptcy reorganization where the private citizens become the Principle and Prime Creditors of the United States and its subsidiaries holding a REMEDY for the recovery of interest due them on their loan of credit to the public domain – and this is exactly what we have on HJR 192 0f 1933.